...4 days later… after a while, they finally found a tree. This tree was a
Totara Tree. Rata was so excited that he had found the perfect tree, that
he forgot to ask Tane (god of the forest) if he could make a canoe out of it.
So him and his guys, spent all afternoon cutting down the tree, and they
knew the exact spot.

So the next day they went back ready to start actually carving the tree into
a canoe, and they cut it down once again. And then they went back the
next day, and it was back up again! And then again, and again. (Well, three
times actually..) But one day, when they cut it down, Rata decided to stay,
so he told his men to go back after a long day, to get some rest. So they
went back, and Rata stayed to see who, what, and how was the tree just
magically appearing each day.

So he spent the night hiding in a bush, right next to the tree to find out that
the birds, insects and creatures of the forest, were putting the tree up, and
all of the little bits and pieces of the tree, back into its place. Rata was
amazed, and at the same time he realized that he forgot to ask Tane if he
could *borrow* the tree!

So the next day, he left the tree as it was, and saw the birds and insects
cutting it down, and carving it into a canoe, perfectly. So even though Rata
forgot to ask (because he was so excited,) he was still able to give the
canoe to his chief.


Over all, I think that this book is pretty good. It is able to teach some
lessons to Rata and maybe some people who read the story as well. I give
this book 3 out of 5 stars. Even though I have not yet read the original
version, I still think that Katerina Te Heikoko Mataira did a great job! If you
have reached this part of the review, thank you very much for reading, and
feel free to leave a comment on my blog.
Posted by Jedida at 09:34 No comments:

Last day of Textile at Tech! 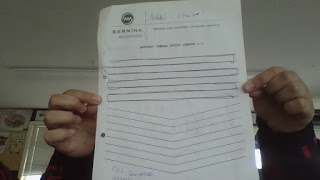 Today was the last day of Textile! So today, we were focusing on getting our practice sewing papers finished. Honestly, I am pretty excited for our next class, because it's either Hard materials, Robotics, or Cooking! on the picture, you might see this piece of paper, this is my finished product. So yeah, thank you very much for checking out the rest of my work/blog posts from textile, and see you in the next subject!
Posted by Jedida at 12:45 No comments: 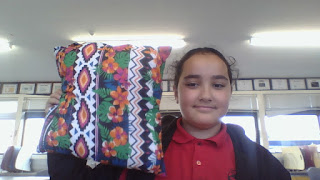 In Textile we finally got to finish our cushions and this is how mine turned out! Next week will be the last week of Textile and then we will move to a different tech class at Tamaki College.

How's my design? ya like it? I like how it turned out and it looks way better than how I imagined and when it was before it was sewed!
Posted by Jedida at 12:03 No comments:

:Book Review:
This book is called Battle, and as you might be able to tell from the title,
this book is about a Battle. But this isn’t just any battle, it’s a Dance Battle.

So, I have read this book/story, and I think that it’s a great book/story, and
the author did a great job of writing it. This book is basically about a boy,
who takes his great great grandpa’s medal to a Battle (a dance battle to be
exact) and he is pretty nervous.

But when it comes to his turn, he puts jacket back and… I guess you’ll just
have to read the story to find out what happens next, or what i’m talking
about. I thought that the story was pretty short, but it’s actually pretty long
for a journal story. It’s a couple of pages long.


But anyways, I think that this book can teach some people maybe a couple
of lessons, like listen to your mother..But over all, I think that this book/story
is very good, and I recommend it for you to read. I give this story ⅘ stars.
Feel free to look at other post from me, and look out the next post about
the same story.
Posted by Jedida at 14:37 No comments: