The first performance was by Mr Burt, Mr Somerville, Mrs Tele'a, and Mr Jacobson. The performance
started with Mr Jacobson missing, and then Mr Somerville came into the (where we were having the a
assembly), with a remote. Mr Burt looked pretty confused but just went with it, Mr Somerville claimed it
was his remote and him and Mr Burt moved some stage walls around and out came a robot. They
played with it for a while and a lot of people loved it. Then out came Mr Jacobson (out of the robot.) 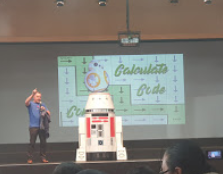 The next performance was by team 1, it was a movie about direction, which way is north south west
and east, and which way to go. It was also about how bees are the future and today, because bees
are very important and helpful to help fruit, and maybe vegetables grow. There movie was based in
the future so they had flying cars and everything.

As Mr Burt introduced the next performance, everyone said, it's time for team 2. So it was team 2's turn, and they had made a movie too. There movie was about there Easter egg hunt that they had last term, at the end of the term. In the movie, they told us how they looked in all directions, up, down, under, over, left, and right. So in all of the directions. Next was team Miss King introduced there movie and told everyone what they are learning about this term. As there movie started to play, we saw Miss Scanlan walking to school and not really enjoying it, so out came a fairy telling her that she can pick in any direction that the fairy gives her, the options that she got from fairy were the beach, and the forest, she choose the forest. After quite a lot of picking paths, she finally made it to school, where all of the students on her class were already there, and she was late. 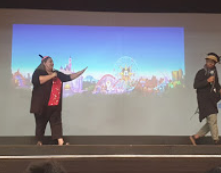 "Time for Team 4!" Mr Burt said, they had made a movie as well. There movie was about navigation.
It started with 4 teachers meeting at the Pack n' save parking lot, with a narrator (Mr Jacobson,) But
there are 5 teachers in team 4, so they called Mr Goodwin (Because he's the 5th teacher,) but he did
not answer his phone or anything, but they got an incoming message from him that basically said that
they had to find there way back to Pt England without google maps or there cars, so they took a while,
and there were quite a lot of funny parts where they *had to stop for important things, quite a few times*
which ended up being food, which made everyone laugh. Eventually, they made it back to school just in
time for a meeting with Mr Goodwin, but they were pretty angry that he made them walk all that way,
and wanted him to do it himself. After there movie had played, Mr Goodwin gave a brief summery of
what team 4 are going to be learning about this term. 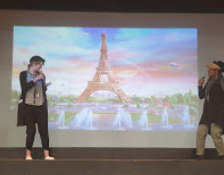 Lastly (or at least we thought) was team 5, and they had a performance, something different. There
performance was about travelling the world, and what continents are at the bottom or the top of the
world. Miss Tapuke was the person that was travelling around the world. The places she went to were
(In order),Europe (Paris), North America (Disney Land), Africa, And Asia. My favourite places were,
Paris and Disney Land.


Now the last performance was by Mrs Lagitupu, Miss Va'afusuaga, and Mr Vogt. They made a movie,
there movie was about how they get to school, how much time they take to get to school, and even
what time they wake up to get to school. In the movie, it also shows where they live, so if there late
or we don't know where they are, they might just live a bit far away from school.

That was the end of immersion Assembly and my story/writing, hope you enjoyed and feel free
to leave a comment. And I look forward to inquiry and learning new things this term.

Today is the 10th of April and it is a Wednesday. We had a talk from three special guests that came to Pt England, and the team 5 block. The talk was about there careers, what they wanted to be when they were little, and what inspired them. They all took turns to talk about how they got to where they are now, and what they do now as well.

They came after morning tea to start with. The first talker was Jason Young, and he is a builder. He started talking about how he grew up around here, and how he went to our school, and how he was once sitting were we are now. He told us what his favourite subjects in school were, and favourite sports as well. He also told us about the other schools that he went to.

The next person to talk was Fiona Bakulich. She is a funeral director, and she talked about what schools she went to,what she wanted to be when She was little, and even what career her parents had. She also talked about what she does in her job, and how she works quite a lot. She told us a bit about her family, and how she loves them very much. After saying what she needed to say, she let us ask some questions about her career, and what she does. She explained that it was kinda of hard some times because she had to stay strong for the people who have had loved ones pass away.

Next up was Tanielu Tele'a. Now, you might of heard that name before, and that's because he's in the Blues rugby team. Because, yes he plays rugby, and that means that it's his career. But, he talked about again, his career, and what does, how does it, and kind of how he feels about playing rugby/his career. He even went to this school, so he was telling about how he used to listen to people talk about their careers as well, and he also said that he remembers sitting right where we are right now, in this school, and the team 5 block.

Over all, I think that this talk was so great, and very helpful. And I think that quite a lot of people in this block got inspired by some of the things that the three speakers said/explained about their careers. I differently loved hearing about what other people think about their jobs, or what they do. And, I woul d love to say thank them very much.
Posted by Jedida at 12:35 No comments:

Mata i Pusi: Story Review
The story that i’m reviewing is about a girl (but we don’t
know her name), she has a Samoan Mum, and a Palangi
Dad. You’ll see how that matters later on in the review. Her
Mum is a lawyer, but we also don’t know what her Dad
works as, she lives with her Mum, Dad, and Nana. Her Nana
is also Samoan.
Having a Palangi Dad, might mean having green eyes,
or light skin for some people. And she has Green eyes,
light brown hair, and light brown skin. So a bit from her
Mum, and a bit from her Dad like some other people.

The name of the story is called Mata i Pusi which means
cat eyes in Samoan, and people tease the main character
in this story because she is bi-racial. So they tease her
because she might look to palangi, or sound too samoan,
and that’s kind of what they tease her about.


Over all, I think that this story can teach you a lot, especially
about bi-racial families, or people. I give this story 4 out of 5
stars, and I also recommend it.
Posted by Jedida at 10:36 No comments: